One afternoon, after my work I took Vilma with me and we drove to Viikki to twitch Pink-footed Goose to my stroller list. It was already quite late and when we arrive I got only brief looks of the Pink-footed before some idiot let her dog run in to a field. All the Geese were in the air and when they landed again, I did not find the Pink-footed again. Fortunately I saw it and there was lsot of birds to look at.
Vilma was sleeping so I did not have any hurry with the birds. Here is some photos taken by my Iphone through my telescope.


Sadly I did not get any photo of the pink-footed. but five new stroller ticks and quality time with my girl was my highlight of the day.

Only a week late.. So, week a go I had amazing day with my friend Tyron Francis in Hanko.
We started very early from Helsinki and almost in first light we started our trip in Högholmen, which is nice place for sea watch.
Lots of birds moved, but most of them were just local gulls, Eiders and other sea stuff. I was hoping to see some migration, but that was not THE day. We stayed about 1,5 hours there and best birds were five White-tailed Eagles and two Velvet Scoters. Also hundreds of local Eiders, some flocks of Long-tailed Ducks and some migrating Lapwings. 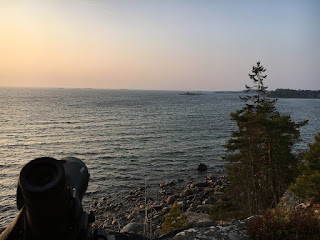 Our next target was Vedagrundet where we had another set of sea watch. There we had flock of Greater Scaups, two Common Cranes and lots of migrating Woodpigeons.
After Vedagrundet we checked Longören where Heikki Vasamies earlier had male Black Redstart. I parked our car and soon we found this beautiful bird sitting on a some kind of wooden thing. Bird showed only very shortly and despite little search, we could not find it again.


During our search I also spotted migrating Rock Pipit and Greater White-fronted Goose. Pair of Greylag Geese had some nesting plans near the shore and few Robins were calling around.

Earlier I had talk with Heikki and he told us that we should visit a place called Kobben and that was our next place. Heikki was there and he told us that there was good numbers of waders around. Greater Curlew, Golden Plover, Ringed Plovers, lots of Lapwings, two Shelducks and lots of other birds. Nice shiny weather and place like this was just we wanted.

It was already noon when we arrived to Hanko airstrip and had some raptor watch. In an hour we had one Rough-legged Buzzard, one Common Buzzard, Sparrow Hawk, two White-tailed Eagles, small flock of Bean Geese, two Great-grey Shrikes and three species of Thrushes.
While the raptor watch I got alarm message of Kingfisher in Helsinki and slowly we decided to go back Helsinki and try the bird.
Not much stops or birds during the drive so we were there quite fast. Bird showed so well that even I got some decent pictures of it.

What a bird! Rare and always great to see. Place was actually very close to my childhood home and I have seen same species in this same park about 15-18 years a go!

Later I dropped Tyron near hes job and quickly twitched Pink-footed Goose from Viikki before I went back home.

Thanks for the company Ty!