Vilma had a day off from daycare and I had same with my work, so after her 1,5 year doctor, we headed to Suomenoja.
Place was full of birders and birds of course. Hundreds of Black-headed Gulls screaming over their breeding colony with tens of Common Coots and other water birds made this place a real concert of high noises!
I walked around the pools with Vilma and because she was sleeping I had change to stop where I want and when I want.
First year tick was Northern Shoveler and I had about 8 today of those beautiful ducks. 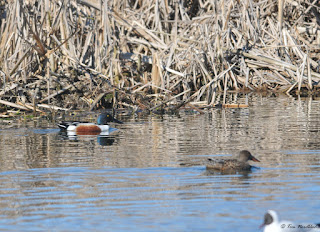 From the same spot I also noticed singing Reed Bunting, which was also new species for my year list.


I continued walking and at some point Vilma woke up, so I had to move my legs faster.
First White Wagtail was nice and I also saw lots of Common Pochards, two Moorhens and and lone Dunnock.
I really tried to see other Ducks, but it seems that I had to visit this place later again. This is absolutely the best place to see Gadwall in this county with Slavonian Grebes.
Few photos here:


Great times with Vilma. No stroller ticks, but maybe we can live with that!